Armed with resources from Edmonton Southside PCN, Brenna Frisby has stopped smoking and started exercising.
Brenna heard about the PCN while listening to an interview about the Learn to Run for Smokers workshop on CBC Edmonton.

“I had wanted to quit for a while. I was just struggling with it. I just decided this would be a really good way to get active and hopefully, help the smoking,” says Brenna.

She made the commitment to drive 40 minutes from north Edmonton to William Lutsky YMCA, where the free workshop was held, once a week for eight weeks.

“I found it to be a fantastic program and Lisa Workman (exercise specialist) was a great support. For me, it was worth it. The educational aspect and exercise was really good. I would curse at Lisa every single class by making us exercise,” she says.

Lisa had the four participants walk and run. By the third class, Brenna was the only participant remaining. For the 32-year-old, exercise as a smoker was a huge challenge.

“It’s like you are going to die. You can’t breathe. Your chest hurts and your whole body hurts. After the second class, I clued in that this may be a good time to quit smoking. For me, it was a good wake up call. Then to have someone supportive, very positive and fun really helped,” she says.

Brenna decided to quit smoking on June 1 after meeting Colleen Makarowski, a PCN respiratory therapist. She used to smoke 10 to 15 cigarillos a day.

“Since everyone else dropped out, I got a personal one-on-one quit smoking session, which really helped me get a plan in place,” she says.

Brenna had tried to use different tools in the past to quit smoking and had been told she needed to quit cold turkey. Colleen introduced her to a Nicorette inhaler, a tool that she never heard of before.

She says this fourth try has been the easiest yet.

“I don’t know why it was so easy but I’m not struggling with the quitting smoking. I get my nicotine hit without actually having to smoke. I appreciated not being talked down to, patronized or just told the evils of smoking. Colleen gave the education I needed and the science behind it that made sense to me,” says Brenna.

She’s thrilled with the amount of money she is saving from not smoking and also found with each passing week, exercise became easier. She is planning to take another PCN workshop, Moving for Health, in the fall. In the meantime, Brenna is going out for more walks with her dog, Molly.

Her plan is to stick with her non-smoking goal, to continue with walking and to watch what she eats. 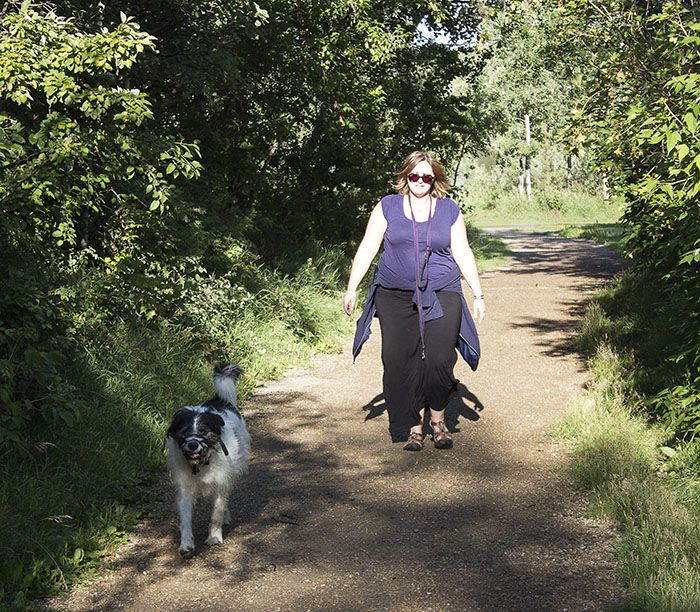