It’s challenging enough to manage your own health care needs. What happens if you are responsible for a parent’s health too?

Bill and Carol Matthews, both 69, are caring for Carol’s 95-year-old mother. However, the whole family has benefited from the multigenerational care and workshops offered from Edmonton Southside Primary Care Network (PCN).

“We didn’t know primary care networks existed before starting the exercise program. It’s amazing. I wish we had found out about it earlier,” says Bill.

Bill required additional health support and guidance after his open heart surgery. While Carol’s mother had difficulties moving, and getting around as a result of being nearly blind.

This left Carol monitoring both her loved ones health needs. Her husband, Bill, met with primary care nurse Kate Miner to discuss the risks of diabetes, while Carol’s mother received a visit from PCN geriatric nurse, Mary Whale.
Bill also struggled with his breathing, and walking. Even on the verge of being diabetic, Bill wasn’t committing to any exercise routines until he was introduced to PCN exercise specialists Sandra Pelchat, and Lisa Workman through the program Moving for Health.

“They set us on the path to the proper exercising, you know for us. I think that’s probably one reason why it was enjoyable, because she knew what I needed and we went from there,” Bill says.

Moving for Health is an eight-week program aimed at introducing patients with chronic health conditions to the benefits of physical activity. To show support for Bill, Carol joined the program and began exercising with him. The couple went from being inactive to using the Terwillegar Recreation Centre three times a week.

“It’s not just about losing the weight either. It’s about staying healthy and the moving, keeping the joints moving, and breathing properly,” says Bill.

Carol was thrilled that she was able to join too. The Matthews have been married for 49 years, and are looking forward to a long retirement together. Carol appreciated being able to see Bill’s progress and improvements each week. She also benefitted from the course by improving her health.

“I found that when I was doing my exercises that I felt a lot stronger, my balance was better and I could climb the stairs without losing my breath. It was great,” says Carol.

The couple credit Lisa and Sandra for changing Bill’s attitude and lifestyle.

“I think that’s the idea of it all, you know. They get you on the right track and then you move along, and before you know it you’re feeling pretty good about it all and about yourself,” says Bill.

Bill’s biggest struggle was overcoming his mental attitude towards exercise and physical activity. Lisa met Bill and Carol at the recreation centre every week, which motivated them to continue on the path of wellness.

They also found the group support from Moving for Health very helpful. Bill was comforted to see others dealing with similar health issues.

During one of the classes, Bill’s health interfered with his ability to breathe. The instructor that night nurse, Roxanne Bulat, recognized Bill’s symptoms and immediately sent him to the hospital. Luckily she did because Bill’s blood pressure was sky high.

“I appreciated that very much. That someone was looking out for us. It could have been one of those you know you’ll be alright, just sit down and rest for a while but she was extremely astute, and a tremendous lady, everybody is the same way,” says Bill.

While the Matthews worked on their health, Carol’s mother was also benefitting from Mary’s help. Mary referred the senior to the Glenrose Rehabilitation Centre for further assessment.

“Life’s better for her now and for all of us too,” says Carol.

Her mother spent four weeks working on her walking, exercising morning and afternoon, and was mentally stimulated through activities such as cards. It helped her both physically and mentally, while relieving some of the stress off Carol. She knew her mother was in good hands, and was pleased to see her progress when she went to visit her.

“They were wonderful. They treated her really well. So it enriched her life tremendously, and that’s all through the PCN,” says Carol.

The PCN staff, services and programs were able to help three different family members dealing with various health complications. Bill and Carol saw so many benefits that they are taking Moving for Health again just after a year. They had fun attending the class, exercising, and being educated and are looking forward to improving themselves even more. 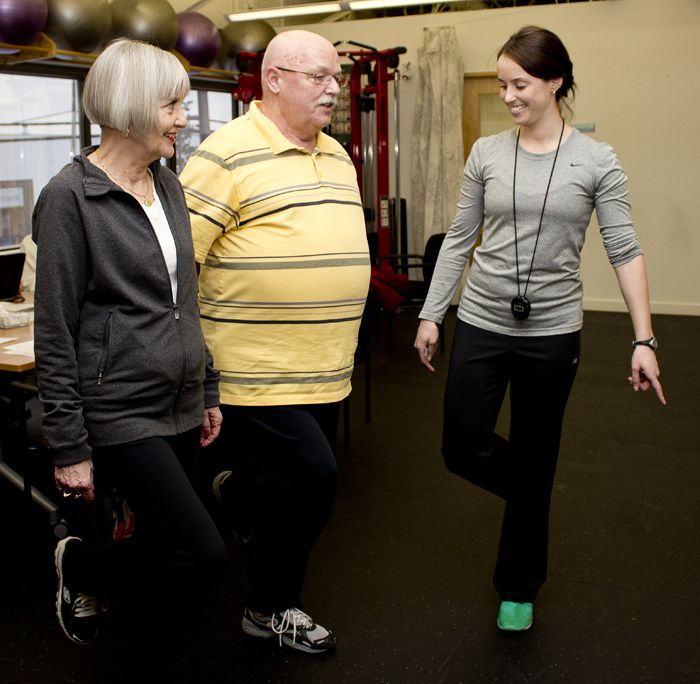