Christine Nelson and Aileen Crick are seeing the benefits of supporting each other for a healthier lifestyle. The two women met during a Moving for Health class at Edmonton Southside Primary Care Network and have become gym workout partners.

Aileen, 42, was diagnosed with Type 2 diabetes two years ago and as a result, she started exercising and eating better. She’s lost 35 pounds, increased her energy levels and stabilized her sugars.

Christine, 60, became a Type 2 diabetic in her 40s and had lost weight. However, once she retired, she found herself inactive with many of her activities focused around the computer, reading or crafts.

“I have problems with one of my legs and I was worried about tripping on the sidewalk. I was starting to stoop,” she says.

Both of their doctors recommended Moving for Health, an eight-week supervised group exercise program for inactive patients with chronic diseases.

“It got me moving more. Before, I was exercising on my own. But now I got back to the gym and I haven’t been to the gym in a long time. It gave me the confidence to get back there,” she explains.

For Christine, Sandra’s suggestion of using a pedometer helped with her motivation.

“I did the class and I couldn’t believe what bad shape I was in and how few steps I was taking. That shocked me into some action,” she says.

Once the class was over, both Christine and Aileen still wanted some motivation to keep moving. They agreed to become workout partners and began meeting at the Terwillegar Recreation Centre where Sandra had helped them become familiar with a gym setting.

“Sandra told me how to use the machines and I was afraid of gyms. I was the fat old lady who was out of shape. It is intimidating. She designed a routine, which is still what we are doing,” says Christine.

“Even when I used to go to the gym, without a gym partner, it is very boring for me. I am very social. Having Christine, helps me get here. I don’t want to let her down. If I don’t have someone, it is easy to talk myself out of it,” says Aileen.

They have bonded during their workouts over discussions about their physical health, raising children, politics and women’s issues.

“It’s nice that I found a friend as well as a workout buddy,” says Aileen.

They are both grateful that their doctors belong to a PCN. Aileen never knew what a PCN was before Moving for Health and was shocked that the services were free.

“I’m from Nova Scotia and if you want someone to help you, you have to pay big bucks. This was nice,” she says.
“Talk to your doctor about the primary care network. It is such a fabulous team. My doctor doesn’t have to spend time talking to me about exercising when she may or may not know about it,” says Christine. 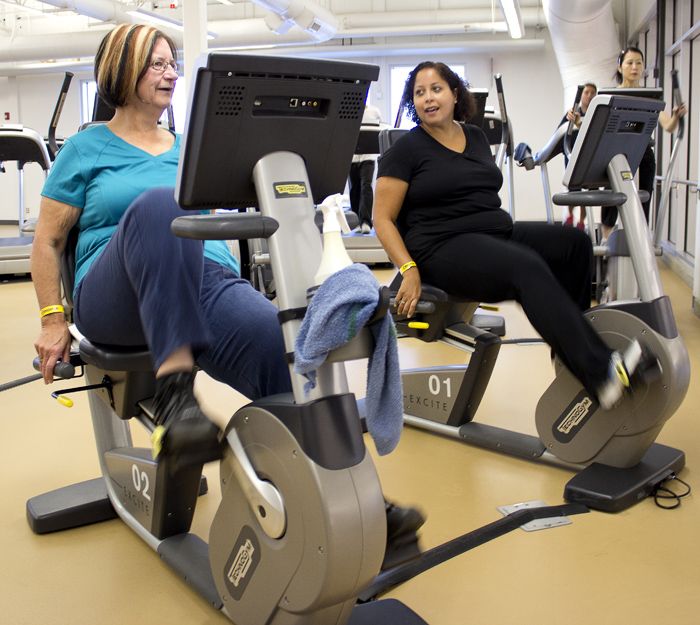