Patient challenges herself to increase steps

Mary Jo Hague is no longer sitting still. Instead, she is making it her mission to take thousands of steps a day to better health.

She became inspired to increase her walking after being connected to Moving for Health, a two-month supervised exercise program at Edmonton Southside Primary Care Network. Mary Jo found out about the program through the PCN nurse and dietitian who are based out of Grandview Heights Medical Clinic and her family physician, Dr. Elizabeth Vetsch.

“They are working with me because of my Type 2 diabetes. They both suggested getting moving would help a lot. The only exercise I was getting was whatever I was getting out of housework, plus walking my dog,” says Mary Jo.
Once she met Sandra Pelchat, the PCN exercise specialist, she was given a pedometer to track her steps. That challenged her to increase her walking to 8,000 steps.

“The pedometer really was a great tool for giving me an idea where I was at. It forces you to re-evaluate what you are doing. It encouraged me to take up walking the dog regularly and for longer walks,” says Mary Jo.

Encouraged by her success, she decided to purchase a pedometer for her husband and son. Her husband was spending hours in front of the computer. He’s now walking through their neighbourhood.

Part of Moving for Health included an eight-week group exercise class at the PCN where Mary Jo learned various exercise tools. In addition, she met Sandra at the Terwillegar Recreation Centre on Mondays to receive more guidance in a gym setting.

“She introduced me to lifting weights. It’s been interesting to try out some of the machinery that helps you develop some strength. I didn’t realize how weak I was. I never even tried something like that before for fear of not working out and hurting myself,” she says.

Mary Jo is also enjoying the track at Terwillegar and brought her walking inside during the bad weather. She’s planning to continue her walking regiment as well as increasing her endurance and core strength.

She’s also learned how to incorporate exercise as a daily routine.

“You hear how people try to talk themselves out of doing things. For me, that was an “Ah ha” moment. Even though it doesn’t indicate success for some people, it was an alarm bell for me to say there are no excuses. You just got to do it,” says Mary Jo. 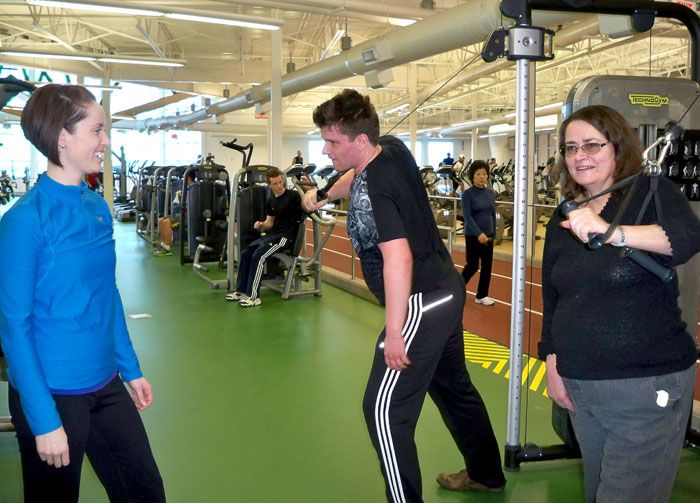