When Jeff Symic discovered he had Type 2 diabetes, he also found out there was a team of health professionals to support him in his medical clinic.

That concept of having all these services under one roof is known as a medical home, which helped Jeff take steps towards a healthier lifestyle.

Jeff has been seeing his family doctor, Dr. Doug Fonteyne, for the last six years. “It’s a good relationship. He knows my health history. He puts in time and points out the resources a guy can use,” says Jeff.

Prior to seeing Dr. Fonteyne, he was feeling lethargic and was getting pins and needles in his legs after sitting for periods of time.

“I felt drained. I had no real motivation. You want to do stuff after work but you are just too tired to do anything. You end up sitting there and it’s just a vicious cycle,” says Jeff.

With the diagnosis in hand, he was referred to see Erin Miller, primary care nurse with Edmonton Southside, who could help him understand what diabetes meant for his life.

“Erin was able to take the time to explain what Type 2 diabetes is and there are the long term effects if you don’t do anything about it. She allowed me to ask questions on everything and take my time, which gave me a good understanding that this isn’t the end of the world. With the right effort and work put in by myself and utilizing resources, I can live with this with minimal issues,” says Jeff.

Erin put him in touch with Krystal Davidson, a behavioural health consultant, and Susan Yoo, a primary care dietitian, to help with other aspects of having diabetes.

“I was down about having diabetes at 33-years-old. I have to lose all this weight. I shouldn’t be eating all the junk food and candy that I enjoy. That’s my go to when I am stressed,” he says.

Krystal helped Jeff with methods on how to relax and reduce his stress and provided him an outlet to talk about any issues that were on his mind. Susan taught him about portion control and filling his plate with half of vegetables. He also saw Tye Babb, an exercise specialist, who encouraged him to start walking 30 minutes a day.

He found encouragement and support from everyone in his medical home. Weight started to come off and he found more time to go to the gym. He’s set goals and achieved them such as playing in a hockey tournament. Jeff’s wife was additional support as she attended his meetings with Erin and Krystal and helped with everything he has tried. “Along with the support from the PCN, my family has been huge contributors to my success,” he adds.

“I am glad I went that route because I fully engulfed myself in all the support that was available. I think if I hadn’t done that, it would have been very easy for me to lapse. You meet other folks who have diabetes and you hear what they are saying so it resonates with what you are doing,” he says.

Besides this course, he is taking a relaxation workshop and it has helped wipe some of the stress from his life. Jeff continues to see members of his health team when he needs to. He did have a lapse for a few months and turned to the clinic for help.

“It’s kind of tough walking out (of the clinic) and not utilizing the support that’s there when it’s available. I personally needed the support of the team to work through that – to reset and get back on track. Life is going to throw these stressors at us in different circumstances. If you don’t have a support network, your chances of success cannot be as great,” says Jeff. 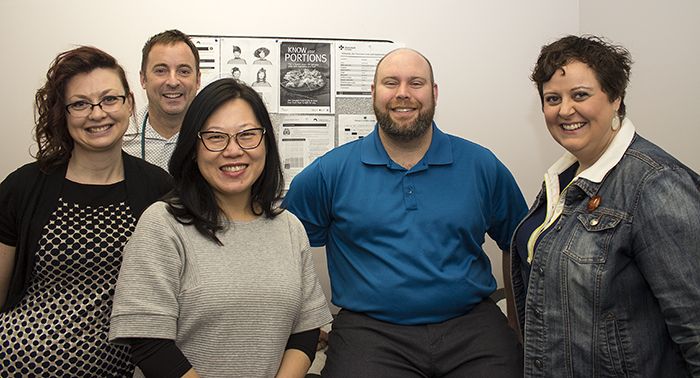