Minimizing stress is key to a healthier life

At 97, Henry Schroder isn’t worried about his health. He still lives at home, shovels his own driveway and builds his own airplanes.

Henry still remembers growing up during the Russia Revolution and can outline specific details of his childhood and his time in the Canadian Air Force during World War II. He was married 68 years to Frieda who died in 2013.

“You see, to have good health at this age, it’s a lifestyle. It’s just not any one or two things. I did not try to carry things on my shoulders. If I realized I was under stress, I would try to eliminate it,” says Henry.

He discovered that gliding and building his own airplanes was one way to manage stress. At the time, he was getting a lot of work calls on the weekends. Being in the air was a way to escape.

“That was one stress reliever and a very good one. Stress is a killer really. It can upset your whole body function. I feel if you have a positive outlook on life, then you are healthier,” says Henry.

Despite his healthy lifestyle, Dr. Michael Hamilton, his family doctor at Bonnie Doon Medical Clinic, introduced Henry to Marcy Figas, a Healthy Aging nurse who is based in the clinic. Marcy came to his home to perform a functional assessment.

“Usually you figure a doctor is so blooming busy that you don’t want to bother him unless you’ve got something really broken. That was my attitude. When he was suggesting that she come and help me, I thought that was really going a big step further than normal medical care,” says Henry.

“Henry is a great ‘poster-story’ for the primary care network! He has such an inspiring and positive outlook on life, which makes him a pleasure to work with. Although he is not in need of immediate need for our services, he has made himself knowledgeable of who we are and is well aware of how to access us. I feel this in itself is a reason why he continues to enjoy health, through accessing the services through his doctor’s office,” says Marcy.

He doesn’t feel he needs to see Dr. Hamilton too often except for his yearly medical check up. Recently, Dr. Hamilton suggested this visit should be bi-annual.

“If he wants to see me every six months, that’s fine. He has Marcy there to come and sit down and see how I’m doing,” he says.

“Marcy has been very helpful as our eyes and ears in the community as well as helping to refer patients to the geriatric clinic for further assessment. It’s great to have her as part of our team,” says Dr. Hamilton. 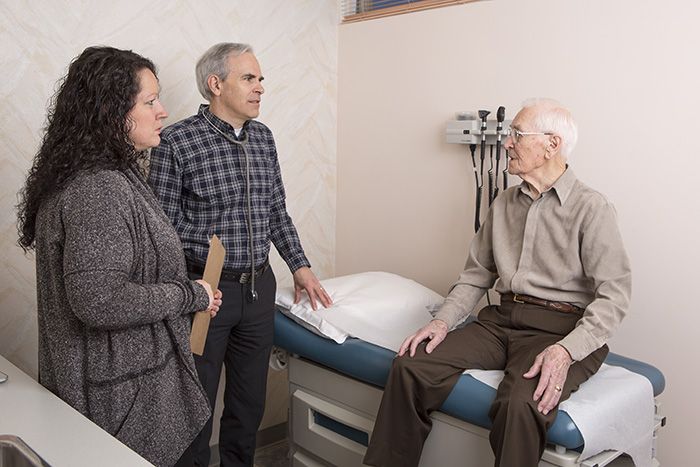